“Privacy and black boxes” is my master’s thesis, a journey documenting my explorations of the relationship between communication design and technology, with a special focus on those technological processes that were made invisible and opaque by technical complexity or by design.

The issue of “opacity” in technology has been increasingly relevant to me, even more so as our society tends to believe that technology is or will soon be the solution to the world’s problems and thus tries to implement it in almost every aspect of life. By opacity, I mean the difficulty or inability to analyze, understand or control part of a technological process that somehow affects us.

In my thesis I was particularly interested in two examples of opaque processes, both tied to our production of digital traces (data) when we use digital devices such as iphones, computers, etc. and both still missing a consolidated and standardize legal framework:

As a designer, my research questions in investigating these issues were mainly methodological: How can we map processes that are invisible, opaque, or protected by legal barriers? How these characteristics influence the design process? Are the tools and methods that we use enough or do we need to modify them or make new ones?

The first step was to perform an adequate literary review of the topic of data and privacy, as well as to set up a series of experiments to see what kind of data I could get about myself, for example. Embracing the approach of Digital Methods, I analyzed how the issue was represented by the scientific community (using Scopus as a proxy), by domain expert bloggers (Ars Technical and Medium), and by encyclopedic knowledge in different language spheres (Wikipedia). 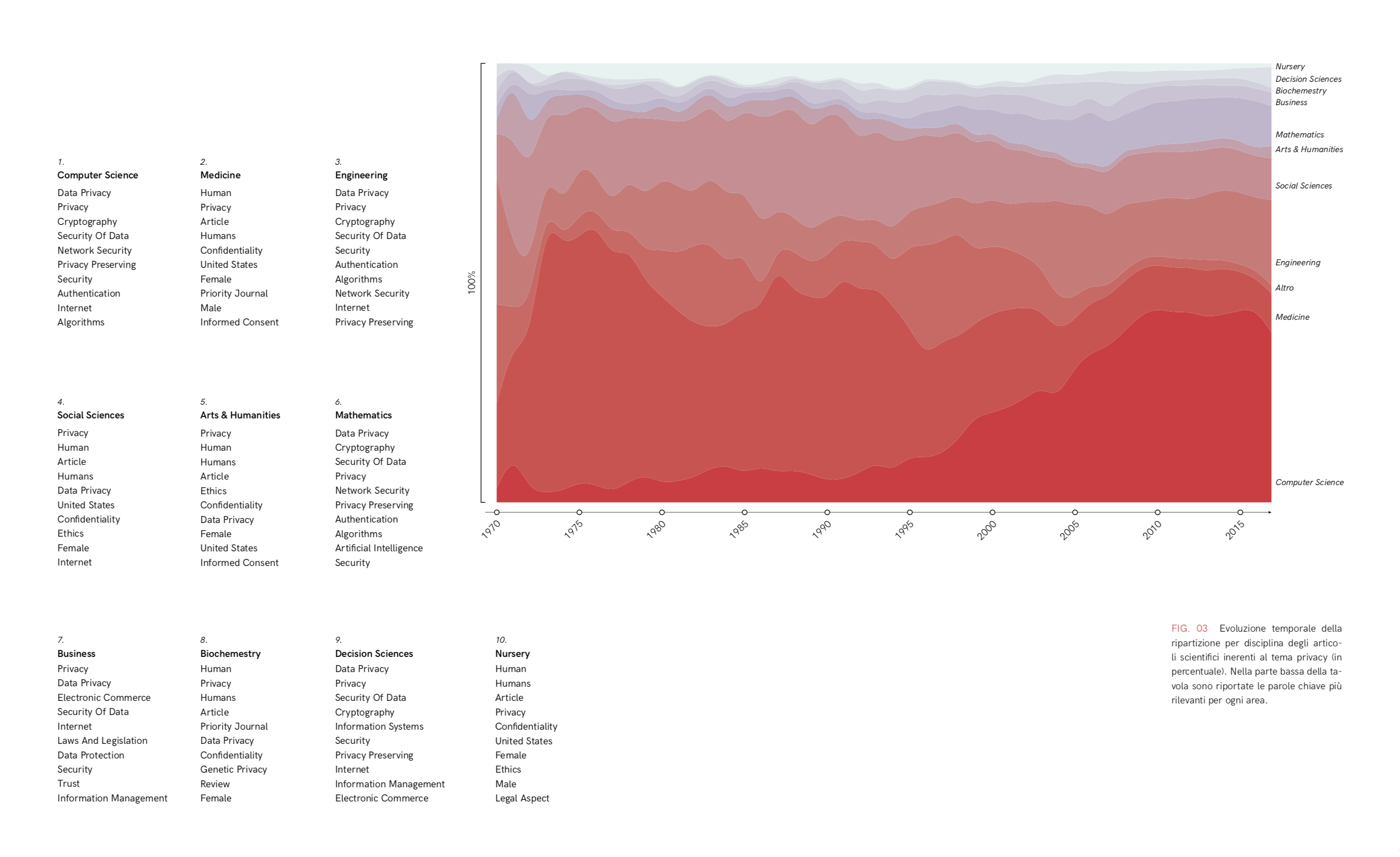 I also tried to get as much information as possible from my social media accounts, focusing mainly on what I could see by retrieving all the location data Google had on me. 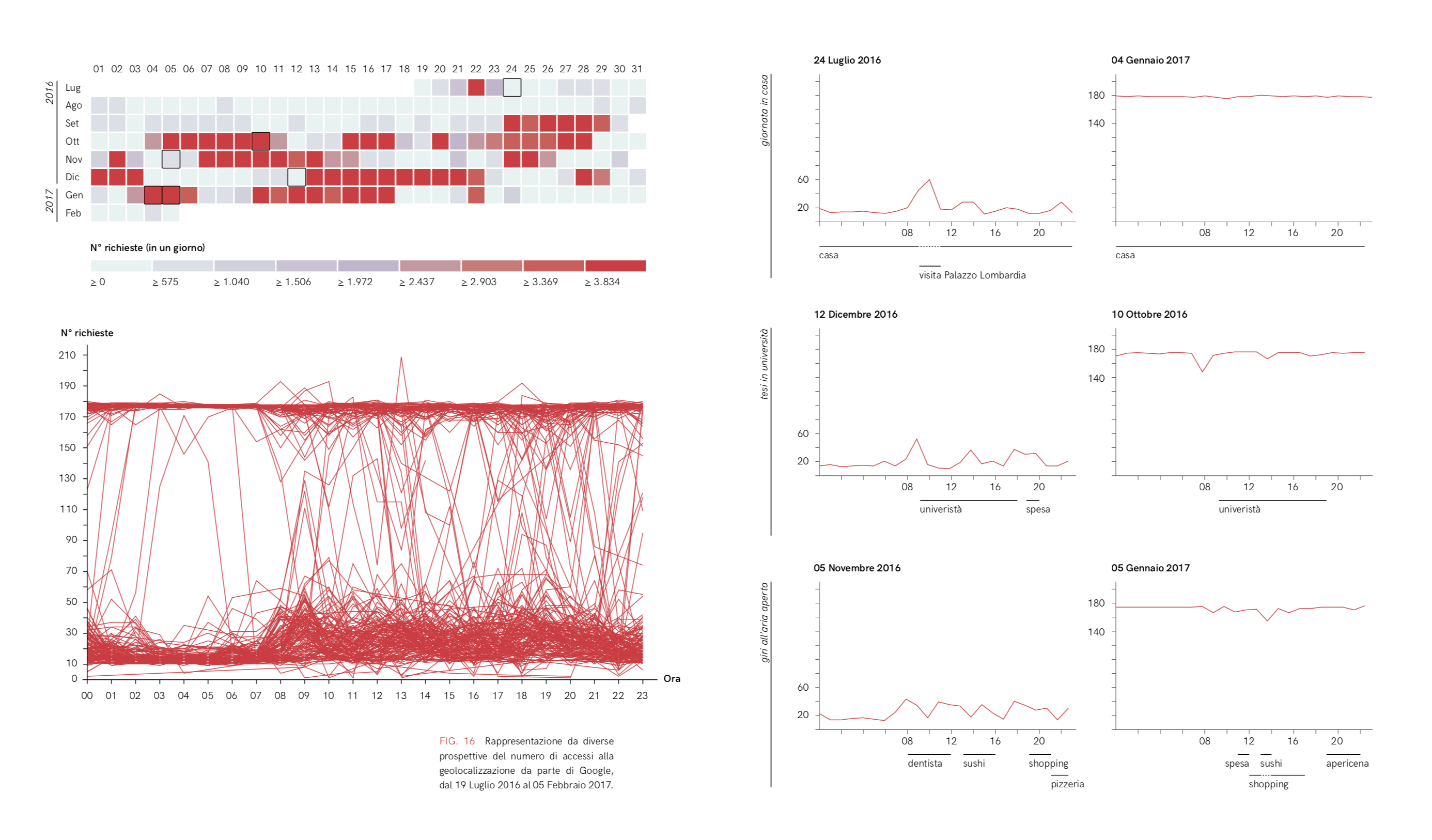 Once I was better acquainted with the issue, I had the great opportunity to collaborate with two groups of people that were working exactly on the two aspects that interested me and both were happy to have a designer that could help them.

The first was a team of researchers from the Computer and Information Science department at Northeastern University, lead by David Choffnes. They were developing an app, ReCon, that could monitor and block any personally identifying information requested knowingly or unknowingly by apps on a user’s phone. Here I tried to design an interface that introduced the user on how ReCon worked and that exposed the data collected, giving back the user control on what to share.

The second collaboration was with a group of activists led by Claudio Agosti that, among other projects, is developing a tool called facebook.tracking.exposed. At the time the aim of the project was, as the name implies, to try to exposed the News Feed algorithm used by Facebook by showing how it affected the user experience with the platform. I thus tried to design an interface that could present each user their feed from a different perspective, highlighting changes in ranking, typology of posts, evolution in time, etc.

In both projects my main objective was always to design solutions that could remove at least in part the veil that covered these invisible processes covered by technological complexity.

The experimental nature of the thesis made my journey necessarily a work in progress and also highlighted the dire need of new methods and tools to investigate the opaque processes of collection and use of personal data.

This was nonetheless a very productive starting point in the analysis of this context from the perspective of a designer, which underlined a great opportunity for communication design: we need to keep working on solutions that can put people in the position to make informed choices about the technological environment they live in.